One of the latest headlines coming out of IDF 2013 in San Francisco today is the unveiling of a next generation GPU product line from Vivante. This technology continues to break through the the limits of size, performance, and power to help customers deliver unique products quickly and cost-effectively. The first generation solutions were introduced in 2007 (Generation 1) and upgraded again in 2010 (Generation 2) with new enhancements that were shipped in tens of millions of products. Gen 2 solutions already exceeded PC and console quality graphics rendering, which is the standard other GPU IP vendors strive to reach today. The next version (Gen 3) successfully hit key industry milestones by becoming the first GPU IP product line to pass OpenCL™ 1.1 conformance (CTS) and the first IP to be successfully designed into real time mission critical Compute applications for automotive (ADAS), computer vision, and security/surveillance. The early Gen 3 cores, designed and completed before the OpenGL ES 3.0 standard was fully ratified, were forward looking designs that have already passed OpenGL ES 3.0 conformance (CTS) and application testing. Many of the latest visually stunning games can be unleashed on the latest Gen 3 hardware found in leading devices like the Samsung Galaxy Tab 3 (7″), Huawei Ascend P6, Google Chromecast, GoogleTV 2.0/3/0, and other 4K TVs.

With the unveiling of Vivante’s fourth generation (codenamed “Vega”) ScalarMorphic architecture, the latest designs provide a foundation for Vivante’s newest series of low-power, high-performance, silicon-efficient GPU cores. Vivante engineering continues to respond quickly to industry developments and needs, and continuously refines and enhances its hardware specifications in order to remain at the top of the industry through partnerships with ecosystem vendors. 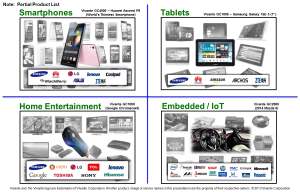 Vega is the latest, most advanced mobile GPU architecture from Vivante. Leveraging over seven years of architectural refinements and more than 100 successful mass market SOC designs, Vega is the cumulation of knowledge that blends high performance, full featured API support, ultra low power and programmability into a single, well defined product that changes the industry dynamics. SOC vendors can now double graphics performance and support the latest API standards like OpenGL ES 3.0 in the same silicon footprint as the previous generation OpenGL ES 2.0 products. Silicon vendors can also leverage the Vega design to achieve equivalent leading edge silicon process performance in a cost effective mainstream process. This effectively means that given the same SOC characteristics, a TSMC 40nm LP device can compete with a TSMC 28nm HPM version, at a more affordable cost that opens up the market to mainstream silicon vendors that were initially shut out of leading edge process fabrication due to their high initial costs.

Vega is also optimized for Google™ Android and Chrome products (but also supports Windows, BB OS and others), and fast forwards innovation by bringing tomorrow’s 3D and GPU Compute standards into today’s mass market products. Silicon proven to have the smallest die area footprint, graphics performance boost, and scalability across the entire product line, Vega cores extend Vivante’s current leadership in bringing all the latest standards to consumer electronics in the smallest silicon area. Vega 3D cores are adaptable to a wide variety of platforms from IoT (Internet-of-Things) and wearables, to smartphones, tablets, TV dongles, and 4K/8K TVs.

Whether you are looking for a tiny single shader stand-along 3D core or a powerhouse multi-core multi-shader GPU that can deliver high performance 3D and GPGPU functionality, Vivante has a market-proven solution ready to use. There are several options available when it comes to 3D GPU selection: 3D only cores, 3D cores designed with an integrated Composition Processing engine, and 3D cores with full GPGPU functionality that blend real-life graphics with GPU Compute. Vivante already is noted in the industry as the IP provider with the smallest, full-featured licensable cores in every GPU class.

More About the Shaders

Some of the APIs supported by Vega are listed below. This is not an exhaustive list but includes the key APIs in the industry and show the flexibility of the product line.

Please join us at the Heterogeneous System Architecture (HSA) Foundation’s BoF (Bird of Feather) talk at SIGGRAPH 2013. Phil Rogers, President of HSA and AMD Fellow will give the keynote speech and update us on the exciting progress they  have made to push the standard and technology forward. The BoF session will also have a Q&A section where you can get answers to some of your toughest questions.

Please look for us when you are there to ask us how we are innovating in this area, or you can just say “Hello” to us.

The Heterogeneous System Architecture (HSA) Foundation is a not-for-profit consortium that brings together some of the best minds (and companies) across the mobile, PC, consumer, HPC, Compute/Vision industries, along with leading academic institutions and anyone that wants to join in on the fun. The goal of HSA is to create a single architecture specification and standard programming interface (API) that developers can easily adopt to optimize distributed workloads across the GPU, CPU, DSP, and any other compute fabric element on the platform. From a high level view, the platform or system (with all the different components) can be viewed as one large, unified processor that executes a given workload. The main goal is to get the biggest bang for the buck or operational efficiency that includes the highest computational throughput (performance) at the lowest power and thermal envelope. Industry participants in HSA include SoC vendors, IP providers, OEMs, OSVs, and a full range of ISVs and application developers that want to make the best use of platform capabilities.

Vivante joined HSA Foundation with the intention of pushing forward a defined specification that advances GPU Compute technologies in mobile, embedded, and consumer platforms. Many of our new and existing customers look to us for guidance on ways to improve their existing platforms and problems they are “stuck” on. Improvements can be as minor as performance gains, reduced BOM (or silicon) costs, and power savings, to re-architecting their designs (through GPU programmability) to fit new use cases and applications so they can extend product lifecycles without incurring major financial costs to replace/upgrade the existing infrastructure. These are some of the ways Vivante looks at defining solutions and future-proofing GPU/GPGPU IP cores to help its customers.

Vivante has multiple products targeting hybrid platforms from mass market cores that have the smallest silicon footprint with OpenGL ES 3.0 and OpenCL 1.1/RS-FS, to mid range and high performance multi-cluster configurable cores. The GPUs work directly with the CPU through a unified memory system, ACE-Lite™ cache coherency, or a native stream interface that connects directly to various compute fabrics. The Vivante HSA design, like the OpenGL ES graphics stack, supports a unified software and hardware package that provides a single architecture spanning multiple operating systems, platforms, and GPU cores. Vivante HSA software will also be backwards compatibility with all existing compute-enabled products and built around HSA APIs and tools that complement our current OpenCL™ and Google Renderscript™/Filterscript support. By simplifying the lives of application developers targeting heterogeneous architectures, programmers can create breakthrough use cases that take advantage of the new paradigm shift to hybrid computing. Real world applications that are already being accelerated by Vivante cores include computer vision, image processing, augmented reality, sensor fusion, and motion processing, with some examples being in the automotive ADAS sector (Advanced Driver Assistance Systems).

The fruits of hard labor of many technical discussions and architecture meetings over the last year since the consortium’s founding in June 2012 has finally come full circle with the release of version 0.95 of the PRM. This manual is a major milestone and lays the foundation for HSA to successfully move forward as it continues defining the platform of the future. The PRM also gives developers an early start as ecosystem partners create amazing applications, tools, libraries, and middleware programs that work best on HSA certified products.

Some features highlighted in the specification include:

The specification also includes HSAIL (HSA Intermediate Language), which abstracts away from the native instruction set of the hardware and can be compiled automatically, in real-time, to the native ISA of the underlying hardware without any developer involvement. The same OpenCL and Renderscript/Filterscript programs can be abstracted and run on HSA platforms also.